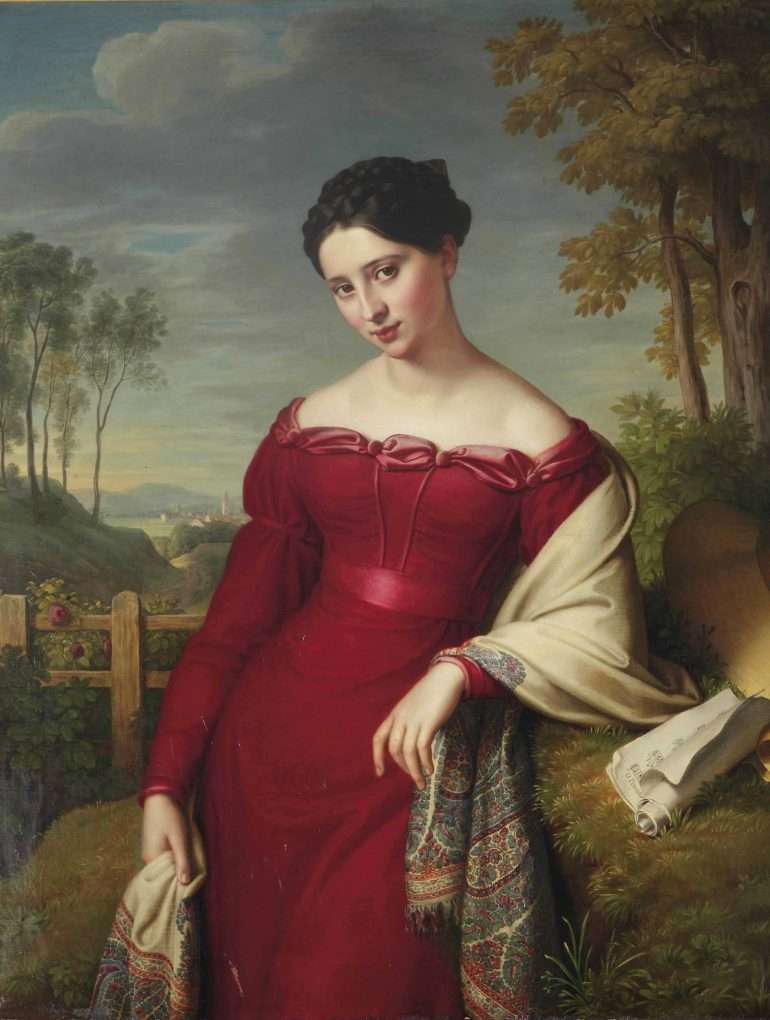 An 1824 painting by Eduard Friedrich Leybold of a young woman wearing an embroidered Kashmiri shawl.

The Essential Guide to Kashmiri Shawls

Kashmiri shawls are fine wool luxury garments whose origins are generally traced back to the 15th century and the rule of Sultan Zain-ul-Abidin — a great patron of the arts and crafts.

In the centuries that followed, Kashmiri shawls would emerge as a status symbol not just throughout the Mughal Empire in India, but also worldwide, especially in Europe, where it was sought after and imitated.

The History of Kashmiri Shawls

Weaving craftsmanship existed in Kashmir long before the era of Zain-ul-Abidin. But he helped transform it into a world-class industry by recruiting master craftsmen from Persia, as well as Bukhara, Samarkand, and other regions of Turkestan (which includes present-day Uzbekistan and Xinjiang).

The Zain-ul-Abidin period also saw innovations in production, including the use of the interlocking twill tapestry technique and new loom technology. The industry became a global phenomenon after Kashmir fell under the control of the Mughals in late the 16th century, with the number of state-owned looms ballooning to 40,000 looms. The Kashmiri shawl became a part of the royal apparel, writes scholar Farzana Ashfaque.

The Kashmiri shawl has evolved over the centuries amid transformations in regional politics and the global economy. Kashmir has seen different rulers since its eponymous shawl’s invention — the Mughals, the Sikhs, and the Afghans, to name a few. And each of these empires has left its own mark on the industry. So too have foreign buyers. For example, in the 19th century, Kashmiri artisans tailored many of their designs to the preferences of European customers.

The region of Kashmir sits at the crossroads of Central and South Asia. The Kashmiri shawl’s construction, design, materials, and motifs emerge from conversations between multiple civilizations. They also reflect Kashmir’s geographical location, the strong influence of Persianate culture, and the tastes of buyers far away.

The Kashmiri shawl has been a living, fluid concept. But in its purest form, it retains some distinctive characteristics.

What Makes a Shawl a Kashmiri Shawl?

So what makes a shawl a Kashmiri shawl?

Well, for starters, there’s the geographic location of its production. A Kashmiri shawl is generally manufactured in the Himalayan region of Kashmir — specifically, the valley of Kashmir. Over the centuries, Kashmiri artisans migrated throughout the subcontinent — for example, to the great Mughal city of Lahore — and production of the Kashmiri and analogous shawls expanded outside Kashmir proper.

The most distinctive qualities of an authentic Kashmiri shawl are its material and production technique.

A Kashmiri shawl must be made of one of the two finest types of wool on earth: pashm or toosh.

Pashm wool — known globally as pashmina — was historically sourced from the other side of the Himalayas: Khotan and Yarkand in present-day Xinjiang and Changtang in Tibet. From these regions, pashm wool was transported via Ladakh to the Kashmir Valley. The pashm wool comes from the domesticated Chyangra goat. Pashm or pashmina is a type of cashmere fiber, but finer than typical cashmere. The diameter of its fibers measures 12 to 16 microns. The fibers of the shahmina, an even softer type of pashmina, can be less than 14 microns in diameter.

The toosh wool, used to make the shahtoosh Kashmiri shawl, comes from the wild Tibetan antelope or chiru. The chiru is an endangered species and so the production of toosh wool products has been banned for decades.

Shahtoosh shawls are more rare and expensive compared to pashmina. The toosh wool is the finest in the world with a fiber diameter of 10-12 microns. There are also Kashmiri-style shawls made using raffal – a thicker, more affordable merino wool between 18 and 24 microns. And while many do not include raffal as part of the Kashmiri shawl family, they can feature elaborate craftsmanship, including intricate embroidery (enabled by the heavier weight).

What Types of Kashmiri Shawls Are There?

The most traditional Kashmiri shawl is the kani shawl.

The kani shawl is loom-woven using the aforementioned twill tapestry technique and can be composed of pashm (i.e. pashmina) or toosh (i.e. shahtoosh) wool.

And then there are a number of embroidered Kashmiri shawls, chief among them the sozni. You may have noticed that sozni sounds a lot like the Central Asian suzani. Both refer to local needlework traditions and share the same linguistic origin. Suzani and sozni come from the Persian word suzan, which means needle.

Other embroidered Kashmiri shawl types include the aari, kalamkari, papier-mâché, and tilla.

What Are Some Common Kashmiri Shawl Motifs?

Other motifs include the chinar tree, the rose flower, and the almond.