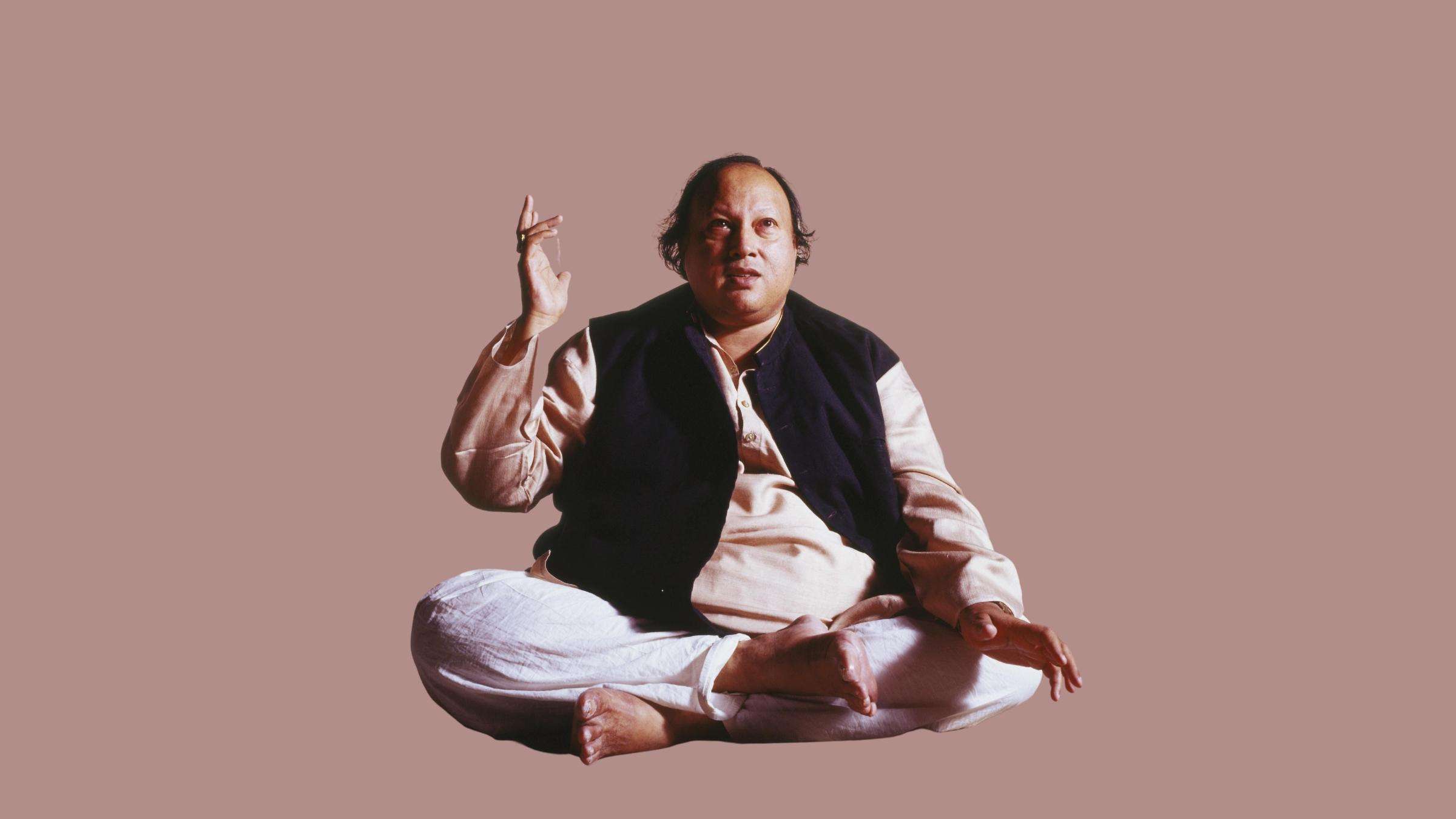 More than a musician, Nusrat Fateh Ali Khan was an ambassador of a nation and a religion.

Long before his death in 1997, the late Ustad Nusrat Fateh Ali Khan was revered as the King of Qawwali. His raspy, soaring voice seared through barriers of borders, culture, and language, reaching audiences worldwide.

A master of the centuries-old musical genre of Qawwali, Nusrat served as its global ambassador, connecting to those with or without a connection to his part of the world.

Nusrat’s rapturous performances made their way into Oscar-nominated films. They were remixed by first and second-generation South Asian immigrant artists like Bally Sagoo and Nitin Sawhney, who adapted them for the clubs of London and New York.

Along with Andrea Bocelli, José Carreras, Plácido Domingo, and Luciano Pavarotti, Nusrat Fateh Ali Khan ranked among the great tenors of the 1990s.

Tragically, Nusrat died early at the age of forty-nine. And though he left this world twenty-five years ago, his voice remains loud as ever. This is because he captures the spirit of his native Pakistan and, indeed, the broader region of South Asia.

With his phenomenal six-octave vocal range, Nusrat effortlessly expressed the highs and lows of human emotion, from ecstasy to deep sorrow. One might say there’s a Nusrat song for every moment.

Qawwali is a spiritual music genre of the Muslims of South Asia, especially in the regions that are now northern India and the Punjab and Sindh provinces of Pakistan.

Its origins are credited to Amir Khusro, a 13th-century Persian-language poet born in present-day Uttar Pradesh, India to a Turkic father and native mother. Fluent in Arabic, Persian, Turkish, and Hindustani, Khusro invented new poetic and musical forms. His background and achievements manifest the ways in which pre-modern India was a crossroads of civilizations.

For centuries, Persian had been the lingua franca of South Asia. But British colonialism brought that to an end. Yet, to this day, Khusro’s Persian-language poetry is rendered into musical form in India and Pakistan.

Qawwali is inseparable from the Sufi spiritual tradition within the religion of Islam. Sufism emphasizes a direct, personal connection with the Divine. And Qawwali is a means toward attaining that union, through music rendered from religious devotional poetry in languages like Persian, Punjabi, Sindhi, and Urdu. It is an expression of the Sufi practice of mehfil-e samaa, which means the “assembly of [spiritual] listening.”

Indeed, Qawwali is more than music. It is an experience. And it is a vehicle to reach a higher state of spiritual being.

Scholar Regula Burckhardt Qureshi describes Qawwali as an “occasion for Sufi devotees to experience mystical arousal within the framework of the Sufi spiritual hierarchy, through the medium of mystical songs performed by professional functionaries.”

Nusrat Fateh Ali Khan was born in Faisalabad, Pakistan in 1948 to a long line of Qawwali artists going back hundreds of years. He learned the Qawwali tradition from his father, Ustad Fateh Ali Khan.

In the 1970s, Nusrat gained popularity in Pakistan and neighboring India. And then in the 1980s, he began to emerge as a global phenomenon. This was driven by two waves: the migration of Pakistanis to the Gulf, Europe, and North America, and the emergence of the “World Music” genre in the West.

Wherever Nusrat’s people went, he followed them. First in the form of audio cassette, and then with his physical presence.

Nusrat’s emergence as an icon beyond Pakistan and its diaspora began in 1985, when he and his ensemble performed at the WOMAD festival on Mersea Island. Writing in fRoots magazine, David Ambrose described the performance as, “Breath-taking and one of the most wonderful sounds I’ve heard in my life.”

Nusrat’s ability to connect with international audiences was not accidental. Driven by the power of his music’s message, he was keen to make his ancient form of performance accessible to global audiences. Being a man with a mission, he adapted to reach listeners outside of South Asia.

Nusrat’s biographer and friend Pierre-Alain Baud notes that he modified his performance to the traditional hon kumoi joshi Japanese pentatonic (five-note) musical scale when on tour in Japan.

The late ethnomusicologist Adam Nayyar, also a friend of Nusrat, witnessed this improvisation first-hand ahead of the 1987 show at Tokyo’s National Theater:

After we had checked into our hotel, the first thing Nusrat did was take his harmonium out and sit in front of the television, listening to all the advertising jingles. ‘It’s five,’ he muttered immediately. When I asked what was five, he told me patiently that the music being used was based on a pentatonic scale.”

A Messenger of Sufism

For Nusrat, and indeed, for most of his peers, Qawwali was not just music. Ahead of his performance at the Brooklyn Academy of Music in 1989, Nusrat told The New York Times that the purpose of Qawwali was to spread Sufism, which he described as “a universal message of love and understanding.”

And so, the night before his Tokyo show, he said to his friend Nayyar that he would use five-note raags (melodic structures) like Bhopali and Pahari, which he felt would be familiar to the Japanese, to ease them into Qawwali. He told Nayyar, “Let us never forget that Qawwals are missionaries of the Sufi faith of unity and this is how we can unite (people) musically.”

Live Qawwali performances are dynamic and interactive. The audience plays a big role. And Nusrat made sure to give people only what they were ready for. He told the Times, ”When we address people who understand the texts, the content becomes especially important. When we address outsiders, we emphasize the form; we reduce the poetic element.”

That was part of Nusrat’s magic ability to connect with audiences, including at this concert in New York’s Central Park:

The Man and His Legacy

Baud describes him as a man of beautiful extremes: “enigmatic and innocent, colossal and peaceful, inspired and ordinary, all parts of the same person who captivated audiences in Lahore, Paris, Florence, Tokyo, or New York.” Nusrat, he says, was “rooted and universal, committed and free.”

Nusrat was not alone in making the 80s and 90s a great era of Qawwali. His contemporaries played a great role. They include Abida Parveen, a rare woman Qawwal, and exceptional Qawwali artists who have since passed, like Ghulam Farid Sabri and Maqbool Ahmed Sabri (known as the Sabri Brothers), and Aziz Mian. The Sabri Brothers preceded Nusrat’s international pivot, performing at Carnegie Hall in 1975.