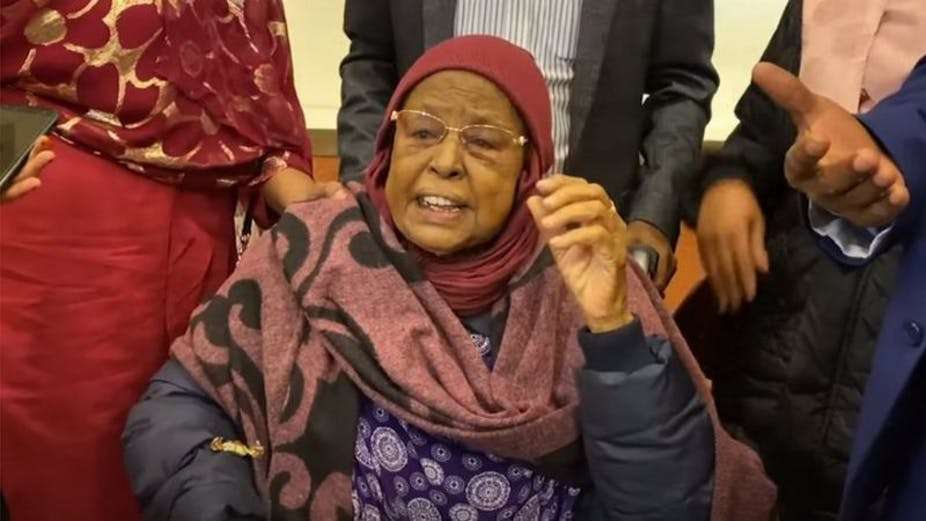 The Beauty and Brilliance of Baxsan, One of the Most Popular Somali Singers of All Time

Seynab Haji Ali Siigaale, widely known as Baxsan, passed away on October, 19, 2020, and was buried a day later in Sheikh Sufi Cemetery behind the Somali National Theatre building in the capital Mogadishu. Along with the likes of Halima Khalif Omar “Magool,” Baxsan was one of the most popular female Somali singers of all time. Almost 60 years after she embarked on her singing career, it remains impossible to find anyone in Somalia who doesn’t recognize her name.

Revered even by her adversaries, Baxsan was not buried in a way that many Somalis would see fitting. Her family, speaking at a press conference in Mogadishu a few days after her passing, denounced the government for failing to accord the famous singer a state funeral. Instead, government security blockades obstructed her body from reaching the cemetery on time. It was nonetheless accompanied by a great many people, who reflected on her long and wonderful career.

Baxsan grew up in a time of rapid socio-economic and political change, between and after the World Wars. It was an era when Somalis were forcefully yearning for freedom from various colonial regimes. Her tumultuous journey as a singer is irrevocably tied to Somalia’s national identity and cultural history.

She became an icon of the late colonial escapades of modern Somali nationalism that led to the formation of an independent Western-style nation-state, later using her prominence on stage to defend and promote the existence of that state.

Baxsan was born in 1935 in the town of Baabili on the main route between the historical Muslim city-state of Harar and the then strategic settlement of Jigjiga in the Somali region in Ethiopia. Hers was a family of respected traders and itinerant sheikhs in the Hawd Plateau, a traditional grazing borderland zone whose ownership is disputed by Ethiopia.

The daughter of a wealthy, respected trader Haji Ali Siigaale and a serene housewife Hawo Said Daroore, Baxsan’s unusual background was reflected in her life, in her observation of Muslim rites, and in her once running a tea-making business in the area around her home.

After her childhood years, Baxsan moved to Dirirdhabe, the Marseille-like town built by the French colonists around a station on the railroad between Djibouti and Addis Ababa. For a while, she made a living in the coffee industry there.

Baxsan means ‘escape’ and an adolescent Baxsan proceeded on her regional journeys and life adventures, settling in the Ethiopian capital Addis Ababa. Here she began her professional singing career, among the first female Somali singers in the early years of the Somali music industry in the Horn of Africa.

She received her ‘escape’ nickname when she fled Ethiopia to Somalia after an aborted 1960 coup in Addis Ababa attempted to oust the ailing Emperor of Ethiopia Haile Selassie. In the middle of that year, amid much elation and exultation, Somalia gained independence from two colonial regimes. British Somaliland and Italian Somaliland merged to become the Somali Republic.

Baxsan lived briefly in Hargeysa in the north before moving to Mogadishu in the south. Here she found herself in a bustling and beautiful city that became a mecca for Somali singers. The national jubilation over the formation of the Somali nation-state affected her in profound ways. She became not only a singer but an actress in a series of cultural — and at times political — plays exquisitely crafted by some of the most popular Somali playwrights, among them Ahmed Saleebaan Bidde and Yusuf Adan Allaale.

Baxsan’s professional singing career took off against this backdrop in the 1960s. It was a time in which Somali cinema and music received much support from the public and the civilian democratic governments which ruled between 1960 and 1969. She saw her role as a singer of nationalist songs rather than romantic ones, a common persuasion of the singers of the time. Baxsan became famous for her nationalist appeals and encouragements. She even joined the newly-formed singers’ band of the Somali National Forces.

The Voice of the War

Early in 1964, the nascent Somali Armed Forces and the Ethiopian army clashed on the provincial border between Somalia and Ethiopia. Baxsan came to embody the national image of the war through Radio Mogadishu with her song: Geyshkayow Guuleysta (O our soldiers, win the war).

Despite their poor training and meager resources, the Somali forces were able to fend off the Ethiopian assault. When a promising young Somali army major, Ibrahim Rooble Warfaa ‘Doonyaale’, unexpectedly led his small forces over the border, Baxsan chanted on the radio, “Rooblow, Rooblow, ma run baa?” (O Rooble, O Rooble, is it true?). After the war, the chief commander of the Somali Armed Forces, General Da’ud, awarded her a gold medal for the role she had played.

Why Traditional Persian Music Should be Known to the World

In the aftermath of 1969, when a military junta took power and became the regime, Baxsan’s career took another turn. She joined the influential regime-funded singing group Waaberi. She released numerous songs and participated in several plays, working with actors and artists Mohamed Ahmed Kuluc, Hassan Adan Samatar, and Ahmed Ali Egaal, among others.

During the 1977 war between Somalia and Ethiopia, Baxsan played no role, certainly not providing the encouragement she had in the 1964 war. Yet, she received another medal from the military junta, in part because she had never publicly challenged their brutal, dictatorial rule.

Ironically, in the 1980s – when the military regime was targeting clans in the north and the south for dissent – Baxsan sang her famous song Geyshkayow Guuleysta at a private concert. This was a difficult time when some of her fellow singers, like the legendary Mohamed Mooge Liibaan, were in the bush around her birthplace, fighting in a guerilla war against the oppressive military regime.

In the 1990s, Baxsan again became a national symbol, this time for her resolution not to leave the country during the peak of the Somali Civil War. Many of her peers emigrated, but she stayed in war-torn Mogadishu along with her friend, the eminent poet Abdi Muhummad Amiin. She continued living in her house in the Bakaara Market, sometimes visiting Djibouti for health check-ups and Hargeisa to see her close friends, like the fellow singer Shamis Obokor ‘Guduudo Carwo’.

In person, Baxsan possessed compassion, humility, and humanity. The first (and only) time I ever met her was in the house of her close friend, my late aunt Ebla Ali. I vividly recall her as someone who hated hostility and war in Somalia. She could not hide her deep disappointment in how the Somalia she found in the 1960s had hit rock bottom. She most likely did not wish to leave Somalia the way it is today — a quintessential failed state.

Mohamed Haji Ingiriis is a doctoral candidate in Modern African History at the Faculty of History, University of Oxford.