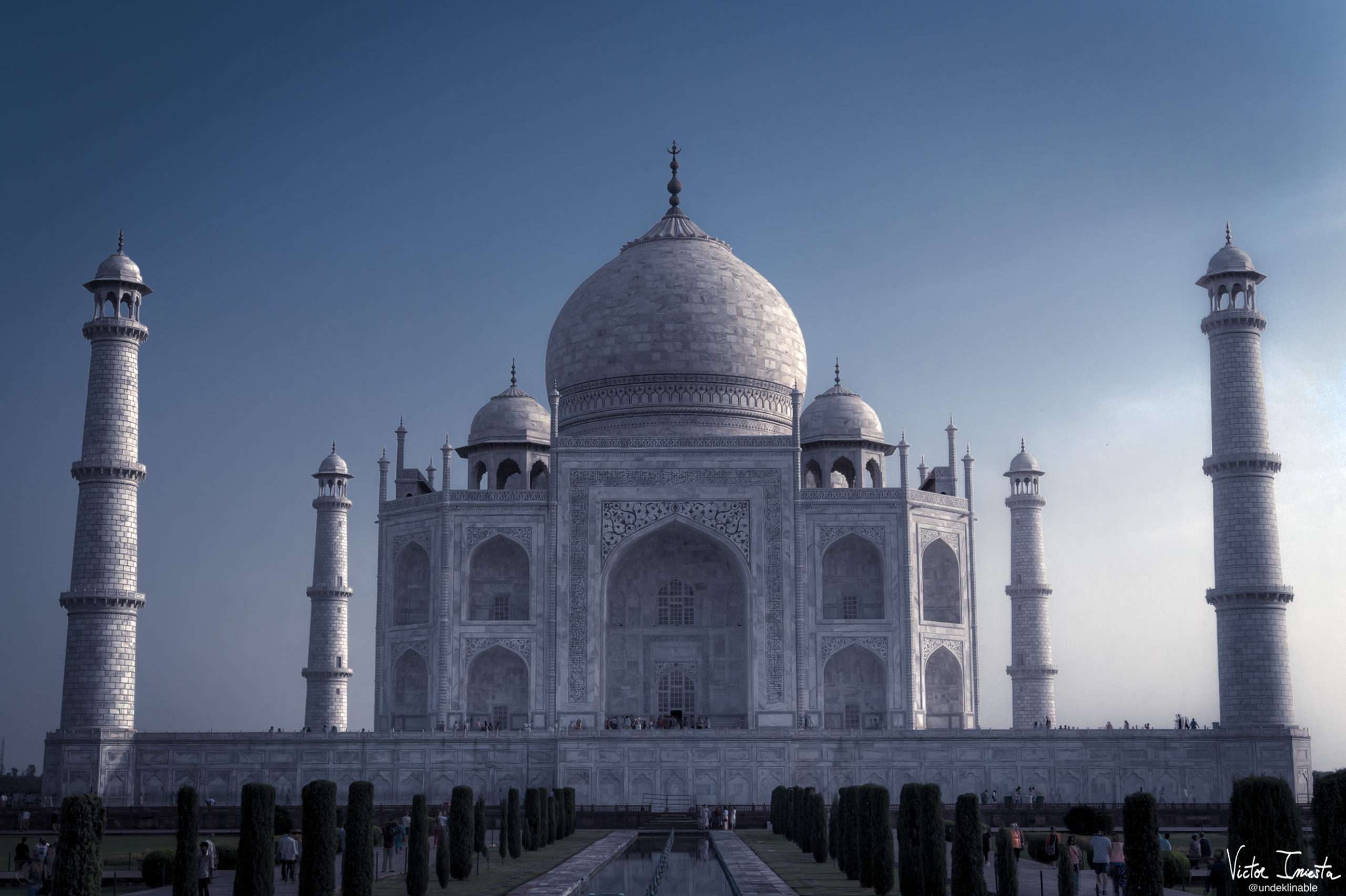 A view of the Taj Mahal in Agra, India. (Image Credit: undeklinable/Flickr)

The Paradisical Allusions of the Taj Mahal

Commissioned in 1631 and completed over the course of two decades, the Taj Mahal in Agra, India is a timeless testament to one man’s love for his wife.

The Mughal emperor Shahab-ud-din Muhammad Khurram may have been known as Shah Jahan, or King of the World, but his wife, Mumtaz Mahal, ruled his heart. Mumtaz died in 1631 during childbirth. And Shah Jahan soon commissioned the grand ivory mausoleum in her honor.

‘The Paradisical House of the Queen’

The Taj Mahal sits regally atop a square pedestal or plinth. Its minarets and domes stand tall against the sky. Up close, there is nothing else in view. The cubic structure features a vaulted entryway or iwan on two sides. The facade of the main iwan protrudes out and is adorned with verses from the Qur’an, the Muslim holy book, in the thuluth script. In total, there are five complete chapters or surahs of the Qur’an that adorn the Taj itself.

The Taj Mahal may be one of the world’s seven wonders, but it is a funerary site whose aesthetics are dominated by aspirations for salvation in the next world. Architectural historian Ebba Koch describes the Taj Mahal as the “paradisical house of the queen.” And it is for those very reasons that Shah Jahan chose the site of the Taj Mahal. Mughal court historian Muhammad Amin Qazwini wrote that “from the point of view of loftiness and pleasantness [it] appeared to be worthy of the burial of that one who dwells in Paradise.”

Both Mumtaz Mahal and Shah Jahan are buried inside the mausoleum, below false cenotaphs. The interior wall that surrounds them features floral pietra dura and verses from the Qur’an inscribed by calligrapher Abdul Haq al-Shirazi, who was given the name Amanat Khan by Shah Jahan. Floral inlays run horizontally along the false cenotaph above the grave of Mumtaz Mahal and in parallel with the ninety-nine names of God.

The union of floral motifs and God’s Word is not a mere decorative choice. The word for Paradise in the Qur’an is al-Jannah, which literally means the garden.

The Taj Mahal building is itself preceded by a charbagh, an Indo-Persian garden separated into four quadrants by water, meant to depict the eternal Paradise promised to the believers in the Muslim holy book, the Qur’an. The fifty-fifth chapter of the Qur’an refers to four gardens in Paradise. And in the second chapter of the Qur’an, believers who do righteous deeds are promised “gardens beneath which rivers flow.”

The physical garden itself, the floral marble inlays and Qur’anic chapters that adorn each of the buildings on the Taj Mahal site, and its location along the right bank of the Yamuna River, all consciously emphasize aspirations that the departed receive the ultimate reward in the afterlife. (As per Islamic tradition, the time in the grave constitutes an interval—al-Barzakh—between this life and the next. The dead are resurrected on the Day of Judgment.)

The outer iwan of the Taj Mahal’s darwaza-e rauza or Great Gate is inscribed with Surah al-Fajr, the eighty-ninth chapter of the Qur’an. The surah speaks of those who failed to make use of their time in the temporal world to aid the weak and instead were overtaken by the lure of luxury and power. On the Day of Judgment, it states, these people will express regret for having wasted their privilege.

The final verses of this chapter, inscribed on to the entryway of the Taj Mahal mausoleum, pledges that the righteous person—the contented soul (al-nafs al-mutmainna)—will be welcomed by God Himself into His everlasting garden (al-Jannah).

The Taj Mahal is no mere secular expression of a man’s love for his wife. It reflects his desire that his companion receives Divine Mercy and the ultimate reward: spending eternity with the Creator in “gardens beneath which rivers flow.”