The Sultan Mosque serves as a marker reflecting the end of Islamic rule of Singapore and the island's emergence as a British colony and entrepôt. 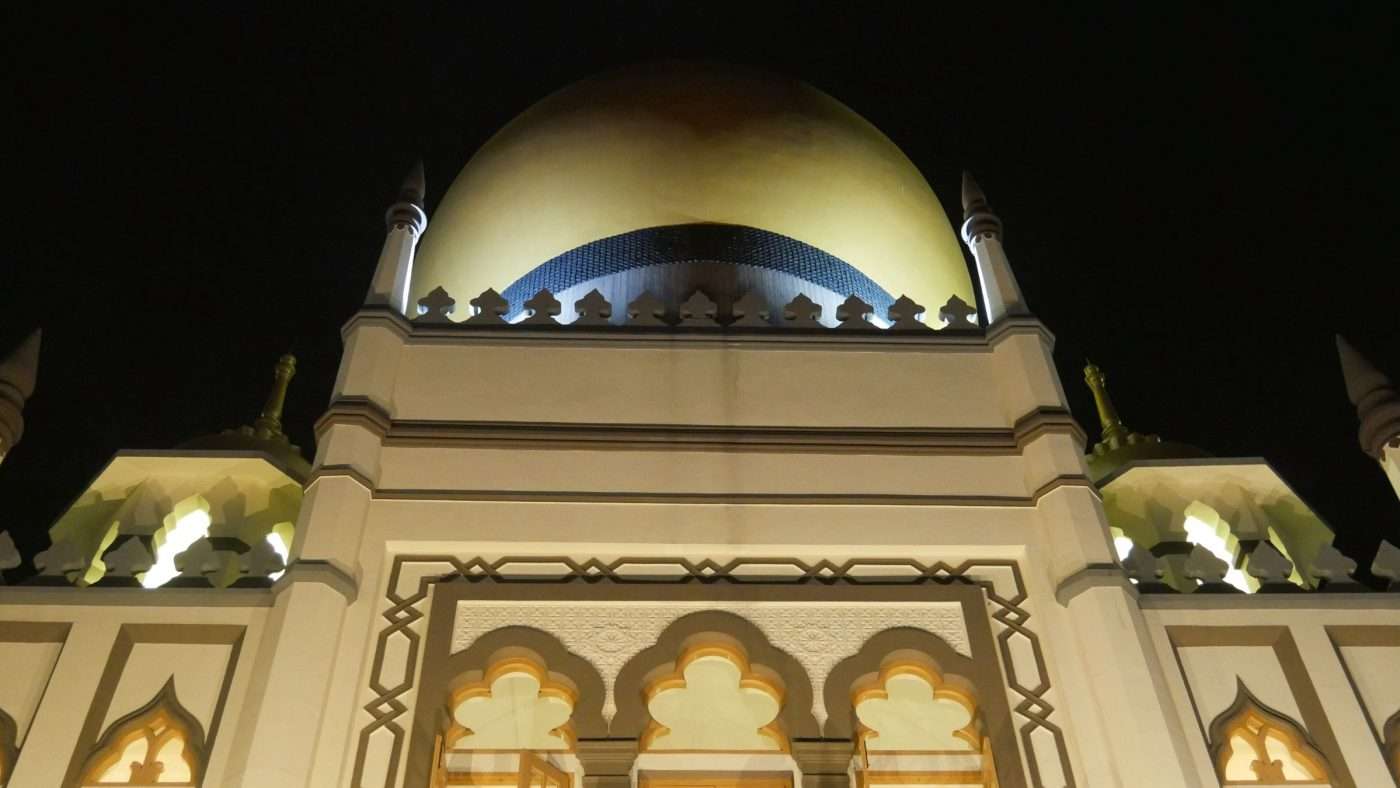 This large onion dome is among the features of the second Sultan Mosque in Singapore that reflects Mughal, non-Malay influences. (Image Copyright: Mogulesque. All Rights Reserved.)

The Sultan Mosque in Singapore’s Kampong Glam neighborhood has a story to tell.

The architectural features and history of this early 20th-century mosque — or masjid as it’s known in Arabic and by local Muslims — tell the story of changing power dynamics in the Strait of Malacca and the emergence of modern Singapore itself.

Located in Singapore’s historic Arab Street area, the Sultan Mosque is an active house of worship, hosting daily congregational prayers. But it is open to visitors who do not observe the Islamic faith yet are keen on learning more about multiethnic Singapore’s Muslim history.

Why the Sultan Mosque Was Built: A Succession Dispute and a Deal

The present-day Sultan Mosque was built in 1932. But its genesis dates back more than a century earlier with the rise of British colonial rule in what are now Malaysia and Singapore.

From the fifteenth to the nineteenth centuries, Singapore was under the nominal control of Islamic empires — first the Malacca Sultanate and then the Johor Sultanate.

Back then, like today, this part of the world was of great economic importance, serving as a strategic crossroads for international trade in the Indian Ocean region and beyond. European colonial powers sought control over the region’s sea lanes and, by extension, the lucrative spice trade.

First came the Portuguese, who in 1511 conquered the nearby port of Malacca, which was already a dynamic, cosmopolitan trade hub connecting to the Arab world, China, and India. A century later, the Portuguese were overtaken by the Dutch. Then, in the late 18th century, the British began establishing formal outposts on the Malay Peninsula, starting with the northwestern region of Penang. Singapore joined Britain’s colonial possessions decades later.

British control over Singapore and the construction of the Sultan Mosque are linked by a succession dispute.

As part of this strategy of denial, Sir Thomas Stamford Raffles of the British East India Company set his eyes on the island of Singapura. (The British anglicized the Malay name for the island as Singapore.)

One Free Port in these Seas must eventually destroy the spell of Dutch monopoly; and what Malta is in the West, that may Singapore become in the East.”

In 1819, Raffles signed a treaty with Hussain Shah, recognizing him as ruler of the Johor Sultanate in exchange for allowing the establishment of a trading post on Singapura. Raffles celebrated his achievement, writing at the time, “Singapore is everything we could desire…It will soon rise into importance.”

Raffles was right. Singapore would rise. As for the sultan, he would soon be cut down to size.

The Kampong Glam area was allotted to the sultan. He built a palace (istana) there. And in 1824, the mosque that bears his name was first constructed. The British East India Company gave Hussain Shah a stipend and contributed to the construction of the mosque. That same year, they moved to strip the sultan of any meaningful power, cementing full control over Singapore.

The Sultan Mosque serves as a marker of the end of the Singapura — a sleepy island in a once powerful Malay Islamic sultanate — to the British colony and entrepôt of Singapore, populated by laborers and traders from across Asia and Europe.

Architectural Features of the Sultan Mosque

The original Sultan Mosque was constructed in the traditional Malay bumbung meru style with a two-tiered pyramidical shingle roof. A century later, it would fall into disrepair.

The second Sultan Mosque has a mix of Mughal and European features. Its onion-shaped domes and chhatris are among the Mughal influences. The mosque’s trefoil arches are likely appropriated from Arab mosques.

The mosque’s two main domes are topped with crescent moon and star finials. Interestingly, their bases are lined with glass bottle ends. These fragments were collected from Muslims of modest means, enabling them to contribute toward the mosque’s construction — an act of sadaqah jariyah (a good deed for which the doer receives continuous bounties, even after death).

In some ways, the new Sultan Mosque symbolizes a break from the island’s Malay past. But Malay and other local cultures have long been syncretic. The region has served as a crossroads of Arab, Chinese, Indian, and various European civilizations.

Mosques in contemporary Malaysia — of which Singapore was once a part — reflect a broad range of influences, from the Ottoman-style Masjid Wilayah to the modernist Masjid Negara.