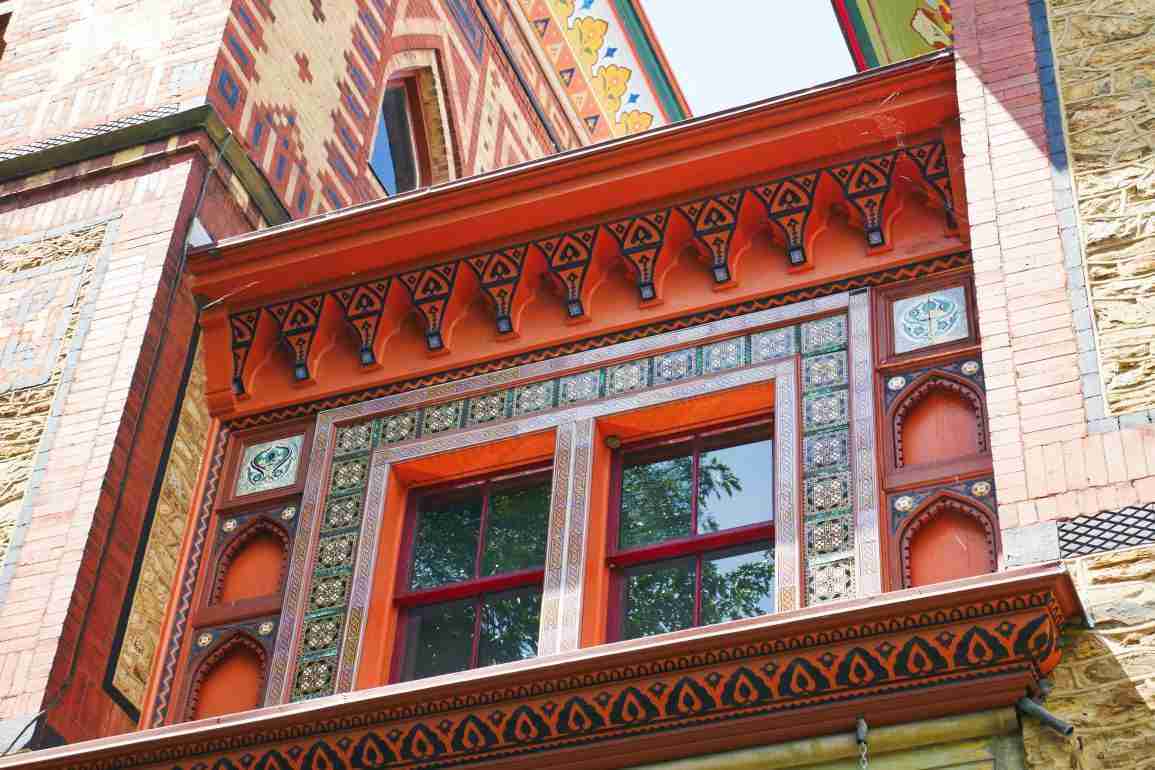 Built in 1872, the Olana estate was designed by Frederic Edwin Church, a landscape painter and luminary of the Hudson River School. Church originally intended to build a French chateau on the site. But his travels to the Middle East inspired him to embark upon a vastly different endeavor. The tour, which took place in the late 1860s, included visits to Alexandria, Beirut, Damascus, Istanbul, Jerusalem, and Petra.

In particular, the sight of a home in a valley in Lebanon captured the imaginations of Church and his wife, Isabel. She wrote, “We came upon an Arabian Nights looking house….The most beautiful verdure surrounded the enchanted spot… [with] glimpses of the river and mountains one caught over and over.”

In the Middle East, Church “admired hilltop homes with their impressive views,” write Evelyn Trebilock and Valerie Balint. Church believed he could achieve something similar at home. He told a friend, “I have got a perfect situation and a perfect site on it.”

Church returned to America to devote much of the rest of his life to building a Persian-style estate in the Hudson Valley with “glimpses of the river and mountains.” He would name it “Olana” — derived from the name given by Greek geographer Strabo to a treasure-storehouse house said to be located on the Araxes or Aras River in the Caucasus.

Olana defies categorization. It is a hybrid of Middle Eastern and Western architecture and design. Church himself described the home as “Persian, adapted to the Occident.” But he never actually visited Persia. The “Persia” we see at Olana is one of Church’s imagination. He wrote to a friend in 1871, “having undertaken to get my architecture from Persia where I have never been, nor any of my friends either, I am obliged to imagine Persian architecture.”

But Olana is more than Persian-inspired. It is a heterogenous mix of Middle Eastern forms and motifs in a Victorian structure that also replicates the layout of a traditional Damascene home. Stencil drawings imitated designs from the Alhambra as well as a grand mosque and other buildings in Isfahan. “Islamic” pointed arches served to frame views of the Hudson — the waterway that Dorothy Zeisler-Vralsted wrote, “represented American perceptions about being at the ‘center of the world.'”

American and Islamic Naturalism Come Together at Olana

Church designed not only the residence at Olana, but also the landscaping of the 250-acre compound. A trained landscape artist, this was Church’s grandest project in the physical form. What Church — a devout Christian — produces is a conversation between American and Islamic naturalisms that is not only intelligible, but also profound.

Olana is true to the ethos of the Hudson River School, which presents “the American landscape as a new Eden in a benevolent universe, blessed by God and providing an uplifting moral influence.” Strikingly, the view of that American landscape from Olana is framed by Islamic arched windows. It is an eastern lens on the west — through western eyes.

Similar spiritual, paradisiacal themes are integral to Islamic building and landscape architecture. For example, the Taj Mahal, which sits on the banks of the Yamuna River and is preceded by a charbagh, represents the Paradise of the Holy Qur’an, which promises the believers, “gardens beneath which rivers flow.”

The Moorish Revival Style in America

Olana is one of a handful of American masterpieces that juxtapose Western and Islamic architectural features. Together, they form a genre one might call “Islamic Americana.” Indeed, a hundred miles down south along the Hudson is the Untermeyer Garden, which appropriates the Persian charbagh.

The interior and exterior structures of the Olana residence feature intricate Middle Eastern designs. These include arched windows and doorways, carved balconies, as well as extensive stencil work with floral designs and geometric patterns adopted from the tile work at mosques in the Muslim world. There are also a number of fireplaces with the tile work of Persian ceramist Ali Mohammed Isfahani.

The main staircase leads to a window amber glass window with patterned cut paper, radiating golden light to the Court Hall, imitating the sun of the east in the cold winter of the west.