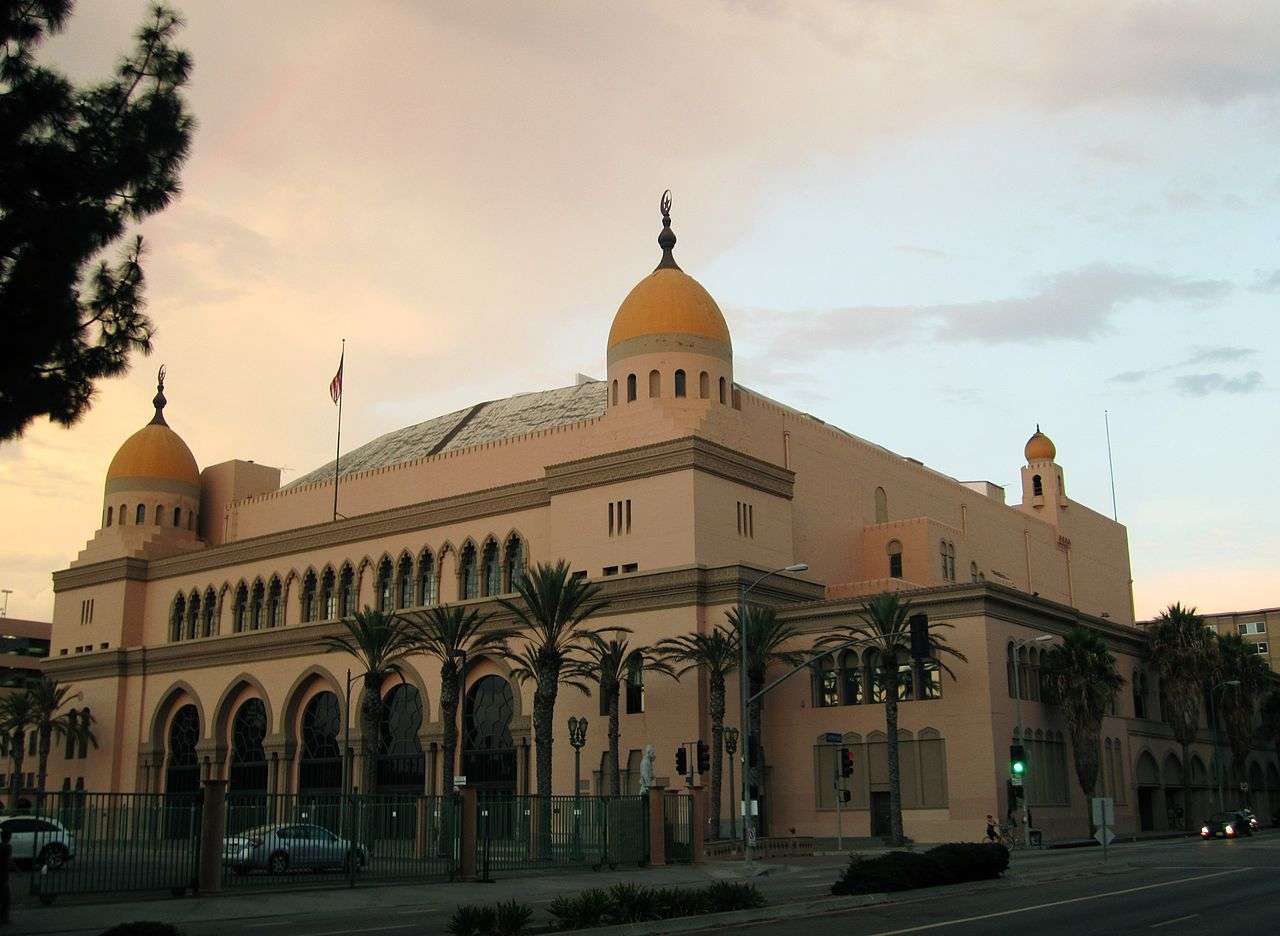 The Shrine Auditorium is a performance hall that also hosts Al Malaikah Temple, an affiliate of the Shriners fraternal organization. The present building was constructed in 1926, replacing a Shriners temple that was destroyed six years earlier.

The Moorish Revival Style in America

The Moorish Revival style is a Western appropriation of motifs associated with Islamic architecture and aesthetics, including large domes, horseshoe arches, and vaulted rectangular facades. Its origins in the United States date back to the first half of the 19th century. The style is said to be inspired by George Washington Irving’s “Tales of the Alhambra,” which was first published in 1832.

Irving regaled readers with his account of the splendors of Muslim Spain, centering on the Alhambra site, where he had the opportunity to live for some time. With its lush gardens and flowing fountains, the Alhambra — much like other Islamic heritage sites — is meant to remind Muslims of the Quranic description of paradise. This physical imagery had a profound effect on Irving, a romanticist, who was well-aware of the religious meaning.

“I tread haunted ground, and am surrounded by romantic associations. From earliest boyhood, when, on the banks of the Hudson, I first pored over the pages of old Gines Perez de Hytas’s apocryphal but chivalresque history of the civil wars of Granada, and the feuds of its gallant cavaliers, the Zegries and Abencerrages, that city has ever been a subject of my waking dreams; and often have I trod in fancy the romantic halls of the Alhambra. Behold for once a day-dream realized; yet I can scarce credit my senses, or believe that I do indeed inhabit the palace of Boabdil, and look down from its balconies upon chivalric Granada. As I loiter through these Oriental chambers, and hear the murmur of fountains and the song of the nightingale; as I inhale the odor of the rose, and feel the influence of the balmy climate, I am almost tempted to fancy myself in the paradise of Mahomet(ﷺ”), and that the plump little Dolores is one of the bright-eyed houris, destined to administer to the happiness of true believers.”

Islamic aesthetics influenced another man of New York’s Hudson Valley, landscape painter Frederic Edwin Church, who after traveling throughout the Middle East, devoted much of his life to building a Persian-style estate along the Hudson River he would name Olana. With Olana, Church took the opportunity to construct a physical space providing unique landscape views of the Hudson. “Islamic” pointed arches served to frame the waterway that Dorothy Zeisler-Vralsted writes “represented American perceptions about being at the ‘center of the world.'” One might call this unusual juxtaposition an example of “Islamic Americana.”

Church’s Olana estate was preceded by an even grander Moorish Revival structure, Iranistan, the Bridgeport, Connecticut mansion of showman P.T. Barnum. The mansion, constructed in 1848, burnt to the ground nine years later and only lives on in sketches. It consisted of three stories topped with gigantic bulbous domes.

In the latter part of the 19th century, another driving force behind the Moorish Revival style emerged: America’s growing Jewish immigrant population. The style had become popular among European Jewish in the first half of the 19th century. Jews, treated as the non-European “other,” embraced that identity by incorporating distinctive Islamic elements in constructing synagogues in Europe. It was “a proud assertion of Jewish heritage which defied Western imperial notions of the East.”

Various eclectic groups, such as The Shriners society, would also use the Moorish Revival style in their buildings and Islamic elements in their dress in an exoticistic display. Timothy Marr writes in “The Cultural Roots of American Islamicism” that American fraternal societies like The Shriners “established long-lasting recreational rites that incorporated and burlesqued Islamicist dress, titles, and oaths…domesticat[ing] oriental masculinity as a masquerade of American manhood.”

While the appropriation of Islamic elements by masonic groups was essentially performative, the Moorish Revival architecture reflected in Olana, the Eldridge Street Synagogue, and other Jewish temples point toward something deeper: the divide between Islam and America and Muslim and Jew has not been perennial. There was, indeed, a time in which “we” saw ourselves in or through “them.”